Gelato Strain is hybrid Indica-leaning cannabis with roughly 56% Indica and 44% Sativa genetics. This strain is a cross of Thin Mint Girl Scout Cookies and fruity Indica Sunset Sherbet. It carries a THC composition ranging from 20% to 26% yet it offers an overall energizing and uplifting effect. Named for how it affects the taste buds and senses of the consumers with pure, dessert-like pleasure and sweetness. 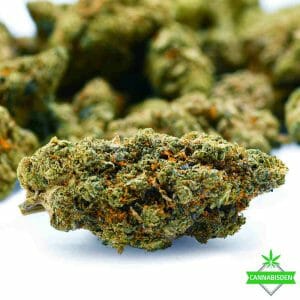 Its predominant smell of pungent citrus compliments fruity parent strains Sunset Sherbet. A note of yeast and dough is noticeable as well. Also, the flavor profile of the Gelato strain started out with stunningly sweet and woody flavors, blended with hints of floral lavender. It leaves a thick white smoke. After taking a hit, the taste transforms into a mix of berries and citrus, acting pleasant surprise for the tastebuds. Gelato’s buds are small, but they have the thick and dense structure characteristic of the Indica variety. Bright orange pistils stand out against forest green leaves that are toned by shades of deep purple. The purple hues come about when high concentrations of pigments called anthocyanins are stimulated by cold weather in the vegetative stage. Although the buds themselves are sticky, short stalks on the trichomes mean that this strain has a less frosty appearance than many others.

Although Gelato strain has slightly Indica-dominant genetics, it rarely leaves the user sedated or feeling tired. Rather, Gelato glides into the head, leaving a high that is predominantly cerebral and focus-bringing, yet simultaneously soothing and calm. Indeed, this strain is ideal for social gatherings, creative ventures, and for a productive afternoon. This will fill the consumer with happiness, creativity, relaxation, and euphoria. Additionally, Gelato can hit consumers quickly, sometimes taking effect before they’ve had a chance to even exhale. The most noticeable effect is a sense of altered perception and confusion, forcing smokers to adapt to their newly intensified surroundings. A palpable body buzz that discourages much activity but still leaves users mobile and not couch-locked meets this head rush.

Also, slightly dry mouth (cottonmouth) and dry eyes are also possible with the Gelato strain, but these two adverse effects are easily manageable with a little extra preparation and planning.

Medical Use of Gelato Strain

Gelato strain offers many medical benefits, both on a physical and mental level. The strain’s body-relaxing effects help muscle spasms, inflammation, cramping, headaches or migraines, and chronic pain. Consuming it late in the evening can assist with insomnia or other sleep issues. In terms of mental aspects, depression, anxiety, and stress are the three conditions that Gelato seems to have the greatest effect upon.